Your point of view

Issues surrounding gender inequality - of opportunity, treatment and pay - are highly contested. Debates on its existence, framing and potential political consequences abound the world over.
In Germany, the problem is recognized at the state level, and for a good reason. The State Statistical Bureau reported that only 15% of professors in STEM are women. Thus promotion of equal opportunity for genders in science is part of the government policy.
All around the country, research training groups (RTG) in various scientific disciplines - neuroscience, chemistry, biology, physics - are mandated to provide special assistance to those finding themselves in a disadvantaged position because of their gender.
At the Faculty of Biology, RTG2175 partnered with the Graduate School of Systemic Neurosciences (GSN) to go one step further. Verena Winkler (RTG2175), Lena Bittl (GSN) and Conny Kopp-Scheinpflug (GSN) have initiated the Gender Awareness Campaign. The Campaign consists of a series of newsletters, covering a range of topics from “Dual Career couples” to “Self-Marketing for Women”. In this first edition, we would like to share the results of the Gender Survey so many of you kindly participated in.

Owing to the collaboration of 133 respondents, the survey sample fairly adequately represents the composition of the Faculty of Biology in terms of gender and seniority (Figs. 1 and 2). 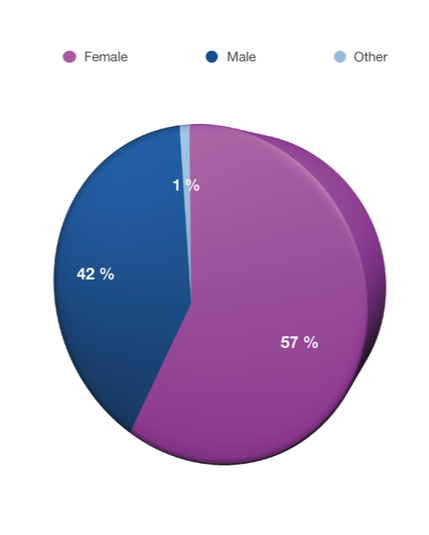 Figure 1. Survey sample is representative in terms of gender of the respondents. 57% of respondents were female, 42% were male, 1% identified as other. 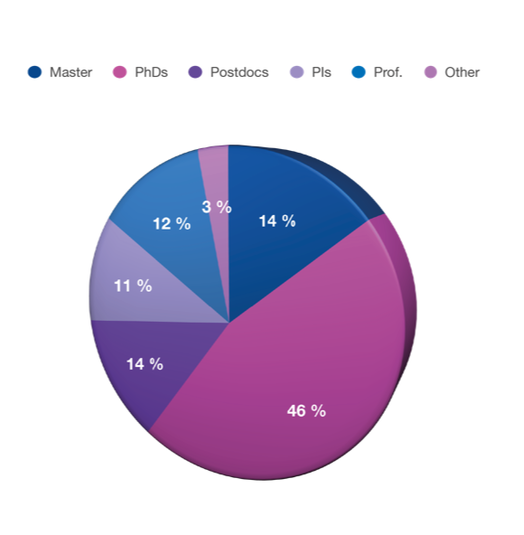 It must be noted, however, that age and career stage are two categories that are no less significant than the gender divide. For example, a male PhD student failing to get into a summer school because of female-specific quotas and a female postdoc being denied a job offer because of her marital status are likely to have different kinds of concerns.
Even so, approximately 70% of respondents recognized the problem of inequality between men and women in science and 75% could understand such concerns even if they did not share them personally.
So our aim in this short report is to highlight the main tendencies underlying observed responses and suggest ways of placing them into broader socio-cultural context.
The survey consisted of 12 questions, which concerned career opportunities, work-life balance and societal perceptions of gender discrimination.
As noted above, the majority of participants admitted discrimination was a problem. However, out of those who did so, the pervasive nature of the problem was more apparent to female respondents (63%), who also tended to choose stronger formulations (26%). Similarly, 72% of women believed their career advancement might be hindered because of sexual discrimination. At the same time, male respondents were divided: 33% did not see much of a problem, while 38% sided with their female colleagues.
Yet, women do not come up against hurdles right away. At the earlier stages of their careers, female scientists do not experience obvious disadvantages. Accordingly, the respondents (53%) did not note significant disparities in mentoring at the level of doctoral studies.
The main stumbling block comes later, when female researchers are faced with the problem of family planning. The attrition of female scientists attests to that. At the LMU Biology Faculty, the numbers display the classical ‘funnel’ pattern (Figure 3): women make up 70% of Bachelor students, 65% of Masters and 59% of PhD candidates. While no official statistics are available for the postdoc, PI and Professor stages, the proportions are observably lower. They are reflected in our survey sample (33% female postdocs, 27% PIs, 13% Professors). 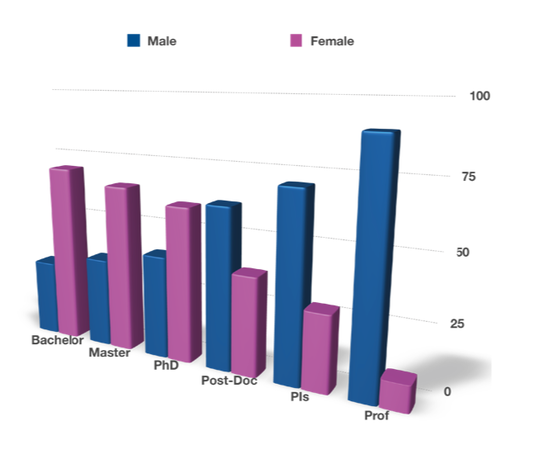 Figure 3. The "funnel" pattern of gender parity across career stages. Women typically outnumber men at earlier career stages (70% of Bachelor, 65% of Master and 59% of PhD students are female), but their participation precipitously drops off at the postdoc stage.

This pernicious pattern was clear to our respondents. While they were unsure about the equality during postdoc selection procedure (40% saw no problem, 37% did admit it), it was obvious to the majority (68%) that, for a female scientist, the chances of obtaining a professorship are very slim indeed. Interestingly, the uncertainty in assessment of fairness at the postdoc stage cleaved along the gender divide: 73% of women stated there was a problem, 60% of men said there was none.

The existence of this pivotal point and the curious tendency of some parts of the population to turn a blind on it could be partially explained by two factors - persistence of gender stereotypes and organizational inadequacy of the current scientific environment. So let us consider in turn how these forces might put an undue pressure on the scientists seeking to create a family of their own.

Aside from objective facts of child bearing, there are many subjective expectations surrounding child rearing. Overwhelmingly, women are still required to handle the bulk of child care duties. The scarcity of daycare places around university campuses does not do much to alleviate the problem. Moreover, the rhythm of academic life is not family-friendly. Invited lectures are held on weekday evenings, the students expect nearly constant availability, and collaborators inhabit distant time zones. Of course, this affects both men and women in equal measure. It is just that women are expected to do all of the above on top of mothering. Female scientists are well aware of the societal pressure and ungainly amount of work it presumes. Female faculty members in astronomy, physics and biology have fewer children than their male colleagues — 1.2 versus 1.5, on average. They also admit to having fewer children than they would have liked (Ecklund & Lincoln, 2011).

Nevertheless, the struggle to maintain a reasonable work-life balance is not merely a question of gender-based societal expectations. An illustration from our survey: the majority of respondents attested that neither male (63%) nor female (81%) scientists manage to strike a good work-life balance. This points to general structural problems in the current scientific system. Pressure to publish, absence of permanent contracts during the postdoc phase, race to the professorship are the bane of academics of either gender.

Yet, since men still tend to have their female companions to fall back on come a family emergency, they prove more resilient in this ruthless environment. Then, having survived it, they perpetuate it. Men occupy the positions of power, and set the rules for the entire system. This is doubly problematic, since once they emerge at the other end of the race, they tend to stop noticing the faults of the status quo. In our limited sample, there was a moderate negative correlation (r=-0.18) between the men’s academic position and the weight he assigned to the gender issues.
The days of the “woman question” are long gone. However, traditional gender stereotypes and forms of discrimination based on them persist and result in the lack of female role models at the higher echelons of the academic hierarchy. Even though female scientists do not have to fight for the right to enter the university anymore, they might have to struggle to remain there.
With this series of newsletters, we aim to raise awareness of the means - available to women, and men - to improve the situation.